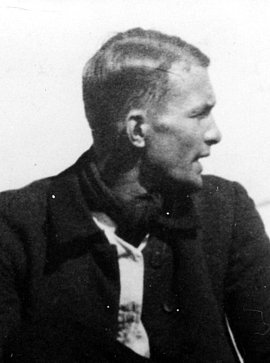 Born in Lüneburg, Botho von Wussow spent his formative years from 1915 at Rossleben School, where he was a close friend of Albrecht von Kessel and Ulrich-Wilhelm Graf von Schwerin von Schwanenfeld. After training in agriculture, he emigrated to Chile in 1924, where he managed agricultural estates. Wussow returned to Germany in 1935 and was given a position as an “England expert” in the NSDAP’s own foreign office, the “Ribbentrop Bureau,” although he was not a party member. His friends encouraged him to take up this post. When Ribbentrop became ambassador in London, he took Wussow with him. Wussow married Mary Pilcher in 1937, and the couple later had a son. In early 1938 he was returned to the “Ribbentrop Bureau” in Berlin. Wussow supported the resistance network that formed against the threat of war during the “Sudetenland crisis” by providing information, and resigned from the “Ribbentrop Bureau” in October 1938. After the outbreak of war, he was employed in the newly founded Foreign Office information department. Wussow was associated with the resistance circles in Berlin, taking part in the first meeting of the Kreisau Circle on agricultural issues at the home of Ernst von Borsig in Groß-Behnitz in 1941. Wussow also provided contact to Wilhelm Leuschner and was one of the Berlin resistance circles’ informers on the foreign policy situation. His wife was denounced in January 1942. To protect him and his wife, the information department posted him to Lisbon at the end of 1942, and he and his family survived the end of the war in Portugal. From the end of the war until his wife’s death in 1957, he lived in Chile again. Botho Wussow died in Munich in 1971.