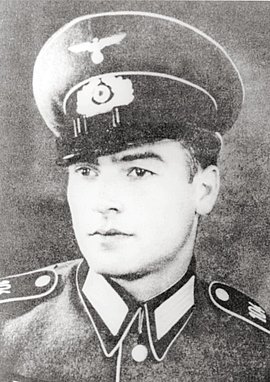 Bernhard Steinbach grew up with thirteen brothers and sisters in Worms and went to school there. During the summers, he went on the road in horse-drawn caravans with his family, mainly in Bavaria, Baden-Württemberg and the Rhineland, where he was able to continue attending school. After the National Socialists took power, a time of persecution and deprivation of rights based on “racial” justifications began for the Sinti and Roma in Germany. Bernhard Steinbach’s family also suffered during this time. In 1933, two of his uncles were imprisoned in Osthofen concentration camp near Worms. The family initially fled to Austria, intending to move on to Italy, but Austria’s “Anschluss” (annexation) to the German Reich prevented them from doing so. In 1939, Bernhard Steinbach volunteered for the Wehrmacht. He was drafted in 1940 and sent to Posen. His parents and siblings and all his other relatives, twenty-five to thirty families in total, were arrested and taken to the Frankfurt-Dieselstraße assembly camp. Shortly later, Bernhard Steinbach was expelled from the Wehrmacht for “racial reasons.” He was sent to join his family in the Frankfurt-Dieselstraße camp, where he had to perform forced labor for various companies. He married and had a daughter. On March 9, 1943, Bernhard Steinbach and his family were deported to Auschwitz-Birkenau. His 13-month-old daughter Clara died shortly after their arrival. As the camp clerk, Bernhard Steinbach was forced to enter the names of the dead in lists every day. He also had to play in the prisoners’ orchestra along with Jewish inmates. After the uprising of May 16, 1944, in the Auschwitz-Birkenau “gypsy camp,” he was sent to Ravensbrück concentration camp at the beginning of August 1944, and soon after that to Sachsenhausen concentration camp. Bernhard Steinbach was drafted back into the Wehrmacht from there shortly before the end of the war and then taken prisoner of war by the Soviets, surviving the camp. On his return to Hannover he was reunited with his wife, who had been liberated by British troops from Bergen-Belsen concentration camp. Most of his relatives had been murdered by the National Socialists in Auschwitz-Birkenau.