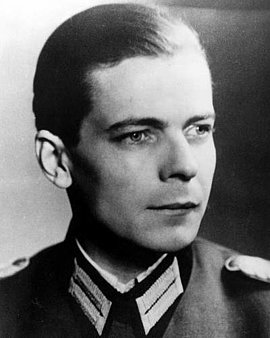 Bernhard Klamroth joined the Reich Army in 1930. He was married to Ursula Klamroth, with whom he had a son. In 1939 he fought as a company commander in the war against Poland. From March 1942 on he was deployed as general staff officer of the 4th Army on the eastern front, where he worked with the first officer of staff, Hellmuth Stieff. In October 1942 Stieff was posted to the Army Organization Department in Berlin and requested Klamroth’s transfer soon after to an office under his charge. Klamroth learned from Stieff that the generals Friedrich Olbricht, Fritz Lindemann, Erich Fellgiebel and others from the circle of former General Field Marshal Erwin von Witzleben were planning to overthrow Hitler. In May 1944 Klamroth obtained the explosives for the planned assassination with Albrecht von Hagen. On July 10, 1944 he told his cousin and father-in-law, Johannes Georg Klamroth, about the conspirators’ plans. After the unsuccessful assassination attempt on Hitler, Bernhard Klamroth was arrested by the Gestapo on July 21, 1944. He was sentenced to death by the People’s Court on August 15, 1944 and murdered the same day in Berlin-Plötzensee.