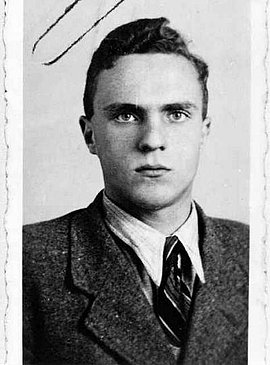 Arnd Freiherr von Wedekind was born in Derschlag and grew up in an officer’s family. After gaining his school-leaving certificate and doing labor service he volunteered for the Wehrmacht. Discharged due to a serious illness, Wedekind began studying medicine in Frankfurt am Main at the end of 1939. At the same time he learned Russian. From 1943 on he was in contact with a group of Soviet doctors and forced laborers with whom he sang Russian songs and discussed the political situation. In the summer of 1943 he was denounced because he had predicted the military defeat and expressed outrage at the treatment of forced laborers. Arnd Freiherr von Wedekind was arrested, sentenced to death on September 1, 1943 and murdered two days later in Berlin-Plötzensee.