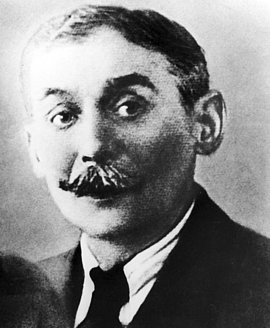 Anton Rose and his wife seine Lisetta ran a movie theater in Darmstadt. After the National Socialists took power, a time of persecution and deprivation of rights based on “racial” justifications began for the Sinti and Roma in Germany. Anton Rose (shown here with his wife Lisetta) fought against being banned from his profession in 1934. When he was forced to close his cinema he bought a house in Frankenthal in the Palatinate region.

A lawyer who was a friend of the family warned them of their imminent deportation. They crossed half of Europe on the run from the National Socialists. After many months, most members of the Rose family were arrested by the Gestapo in Schwerin at the end of 1943 and deported to Auschwitz-Birkenau extermination camp. Anton Rose was murdered in the gas chambers there during the night of August 2, 1944. Lisetta Rose was consigned from Auschwitz-Birkenau to Ravensbrück concentration camp, where she perished. A total of thirteen members of the Rose family fell victim to the National Socialist genocide.