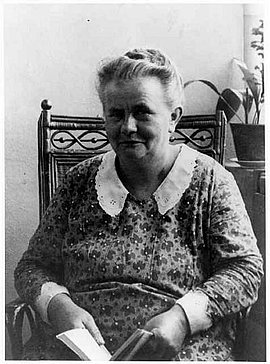 Anna Götze, a folder in the printing industry, belonged to the Social Democratic Party (SPD) from 1897 to 1917, and then joined the Spartacus League. From the beginning of the 1920s on she was active in the FAUD, the German Free Workers Union (Anarcho-Syndicalists). After 1933 she was responsible for the FAUD networks in central Germany. Her apartment at 6 Sigismundstraße in Leipzig was one of the basic logistic units of the anarcho-syndicalist resistance. Arrested for the first time in 1935, she was arrested again on October 21, 1937 and sentenced by the People’s Court on April 12, 1938 to three years in a penitentiary. After her imprisonment in Waldheim Penitentiary she was deported to Ravensbrück concentration camp, where she met up with her daughter, Irma. Anna and Irma Götze managed to escape during the death march of the camp prisoners in April 1945. Both women survived the war.