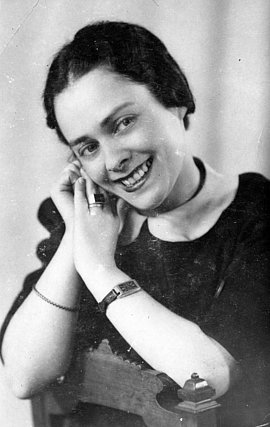 Alice Licht grew up in a middle-class family in Berlin-Tiergarten. Not permitted to study medicine as a Jew after 1933, she became a secretary and worked for the Aid Association of Jews in Germany. In the spring of 1941, she began performing forced labor in the ACETA artificial silk factory in Berlin-Lichtenberg. The work was so hard that she soon feigned a stomach ulcer to be dismissed. Otto Weidt employed her as a secretary in his brush factory in June 1941. After the arrest of her blind and deaf colleagues in 1942, Alice Licht decided to go into hiding along with her parents Georg and Käte Licht. Otto Weidt rented a storage room in Berlin-Mitte, where the Licht family hid from February 1943. The Gestapo found out about them eight months later. The family was deported to the Theresienstadt Ghetto in November 1943 and six months later to Auschwitz-Birkenau. Otto Weidt wanted to save Alice Licht. He went to Auschwitz and offered to sell his brushes to the camp administration. However, Alice Licht had already been transferred to the Christianstadt subcamp of Groß-Rosen concentration camp. Via a Polish worker, Weidt sent her a message that he had deposited civilian clothing, money, and medication for her near the camp. When the Christianstadt camp was closed at the end of January 1945, Alice Licht managed to escape. She experienced the end of the war in Otto Weidt’s home in Berlin-Zehlendorf. In the summer of 1946, she emigrated to the USA and started a family.