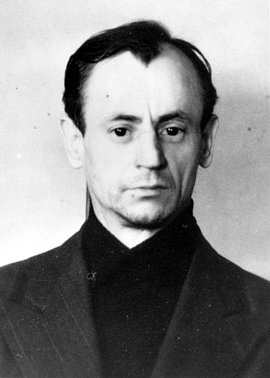 Alfons Kaps, born in Neustadt (Upper Silesia) in 1901, trained as a waiter after attending school in Wuppertal. He joined the KPD in 1923, becoming head of a cell in Wuppertal-South after 1933. When the Wuppertal KPD was broken up by the Gestapo in 1934, Kaps emigrated to the Netherlands. He was recognized as a political refugee and received support from the communist aid organization Rote Hilfe (Red Aid). From 1937, he worked in the KPD’s West German regional leadership under Wilhelm Knöchel, traveling to Düsseldorf as an instructor. His connections were interrupted in 1940 by the German invasion of the Netherlands, and he did not manage to get to Düsseldorf again until 1941. Kaps had contacts in various factories, and worked in close cooperation with Wilhelm Knöchel, who attempted to set up a resistance group in the Ruhr region from his base in Berlin. Kaps produced various leaflets, including the underground magazine Freiheit, distributing flyers and communist newspapers. He was arrested on January 12, 1943, and committed suicide in prison after the charges were made against him in March 1944.