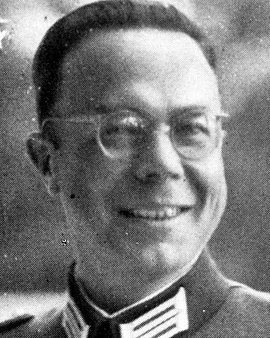 After training for the legal profession, Albrecht von Hagen worked first as a district judge, then from 1931 on as corporation lawyer in a bank. He was married to Erica Marianne von Berg, with whom he had a daughter and two sons. In September 1939 he was drafted as a reserve lieutenant and fought in the campaigns in France and the Soviet Union. In 1943 he was posted to Angerburg/East Prussia. Although the military leadership was aware that Hagen rejected National Socialism, he was assigned under Major General Hellmuth Stieff in the Organization Department of the Army High Command to tackle problems of the wartime army command structure. In November 1943, Hagen and his friend Major Joachim Kuhn hid two packages of explosives for the planned assassination attempt on Hitler. The two officers were observed doing this by the Secret Field Police, but were not recognized. Later Hagen again gave explosives to Stieff, who passed on the packages to Claus Schenk Graf von Stauffenberg in May 1944. After the unsuccessful assassination attempt of July 20, 1944, Hagen was arrested, sentenced to death in the first trial of the conspirators before the People’s Court on August 8, 1944 and murdered the same day in Berlin-Plötzensee.