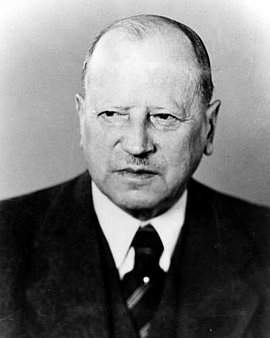 Albrecht Fischer was married to Elisabeth Schiedt, with whom he had a daughter. After a career in public service in Württemberg and in the Württemberg Union of Employers’ Federations, Albrecht Fischer worked from 1934 on as a business adviser for Robert Bosch GmbH. After 1936 Carl Goerdeler also took on assignments for the company. In general discussions about the political situation, Fischer was initiated by Goerdeler into the plans for the coup and eventually offered his services as commissioner for military district V (Stuttgart). The attorney Reinhold Frank took on this task for the Baden region. After the failure of the assassination attempt on Hitler, Fischer was arrested by the Gestapo on the night of July 20-21, 1944 and brought to Berlin shortly after. On January 12, 1945 he was tried by the People’s Court under Roland Freisler and ultimately acquitted of the charge of high treason and “aiding and abetting the enemy”. But Albrecht Fischer was not released from custody; on February 20, 1945 he was deported by the Gestapo to Sachsenhausen concentration camp, where he remained until his liberation by the Soviet troops in April 1945.