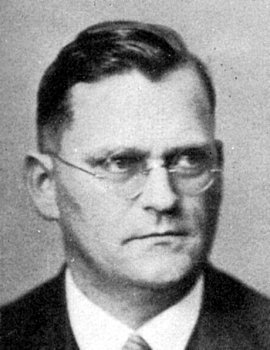 Having started his career in the school sector, Adolf Grimme became a leading Social Democratic politician focusing on education and culture. A religious socialist and school reformer, Grimme was vice president of the Berlin-Brandenburg schools board from 1929 to 1930 and was then appointed minister of science, art, and education in Otto Braun’s Prussian state government. He lost this office through Papen’s coup d’état on July 20, 1932. After 1933 he maintained wide-ranging contacts to opposition intellectuals. He was part of a circle discussing philosophical and literary subjects that met regularly in varying locations. Grimme had links to the playwright Günther Weisenborn and to Adam Kuckhoff from his student days. He also knew Arvid Harnack. The Gestapo searched Adolf Grimme’s home and found a leaflet written by Harnack on October 11, 1942, and he was arrested. The prosecuting counsel pleaded for the death sentence before the Reich Court Martial. In early February 1943, Grimme was sentenced to three years in a penal institution for “failing to report a plan for high treason,” and imprisoned in Luckau and Fuhlsbüttel. He survived the end of the war and became minister of culture for Lower Saxony in 1946 and director general of Northwest German Radio in 1948.