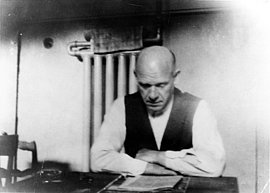 The Hamburg harbor worker Ernst Thälmann was a Social Democrat and organized in the transport workers’ association from 1904. Drafted as a reservist in January 1915, he experienced the horrors of war on the Western Front. In the fall of 1918, he did not return to the troops from leave in Hamburg, remaining in the city until the revolution. He joined the USPD and was elected onto Hamburg’s city parliament in 1919. Along with the majority of the Hamburg USPD, he was in favor of joining the Communist International in 1920 and was a delegate at the party conference in Halle in October of that year. From 1921 he was chairman of the Hamburg KPD district and a member of the party committee for the Wasserkante region. A popular figure in Hamburg, Thälmann was employed as a party secretary there from 1921 and was an uninterrupted member of the city parliament until 1933. He was on the KPD’s central committee from 1921 on and was elected into the party’s leadership at the IXth party conference in Frankfurt in 1924, remaining a member from then on. Representing the party in the Reichstag from 1924 to 1933, he was the KPD’s candidate for the Reich presidential elections in 1925 and 1932. Arrested on March 3, 1933, he remained determined in prison. Thälmann spent twelve years in solitary confinement, first in Moabit, then in Hannover and Bautzen. After being transferred to Buchenwald concentration camp, Ernst Thälmann was murdered on August 18, 1944.