In the Face of Annihilation. Work and Resistance in the Ghettos, 1941-1944

In 1941, the Germans occupying Eastern Europe began the mass murder of the European Jews, the Holocaust. People in the ghettos acted very differently in the face of this annihilation: Pearl Klein in Munkács, Hungary, was close to desolation. Chaim Rumkowski in Łódź, Poland, set up industrial production sites in the ghetto and hoped the Germans would not act against their economic interests. Oswald Rufeisen in Mir, Belarus, misled the Gestapo and led the ghetto inmates to freedom. In Białystok, Chaika Grossman worked as a courier for the resistance. Emanuel Ringelblum documented Jewish life and German politics in the Warsaw Ghetto, before an uprising began there in April 1943. That uprising sent out an important message: Jewish men and women will not be led like lambs to their slaughter.

Produced by students of Touro College Berlin in conjunction with the German Resistance Memorial Center, the exhibition tells these stories and others about Jewish reactions to the Holocaust. It documents the diversity of Jewish life even in the face of annihilation. 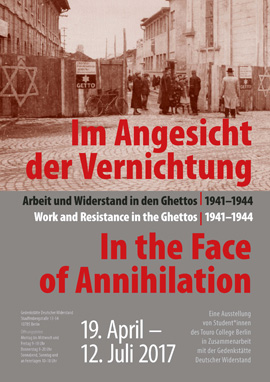 The exhibition is on display in the special exhibition area on the first floor until July 12, 2017.
Opening hours