An exhibition by the German Resistance Memorial Center

The Reich Banner Black-Red-Gold association of republican war veterans was founded as a cross-party organization for the protection of the Weimar Republic after the severe political upheaval of 1923. Social Democrats and members of the German Democratic Party and Center Party worked to help reinforce the republic and uphold the constitution.

Most members of the Reich Banner were former soldiers from World War I. Unlike the extreme-right Stahlhelm (Steel Helmet) veterans' and defense organization or the Communist Party's (KPD) Red Front Fighters' Alliance, its members supported Germany's new democracy. The Reich Banner soon developed into a mass organization with up to three million members.

However, Hitler's appointment as Reich Chancellor on January 30, 1933, sealed the republicans' defeat. The Reich Banner's last major freedom rally was held outside the Berlin Palace on February 19, 1933. The Reich Banner was banned shortly later and its activists were persecuted, imprisoned, or driven into exile. 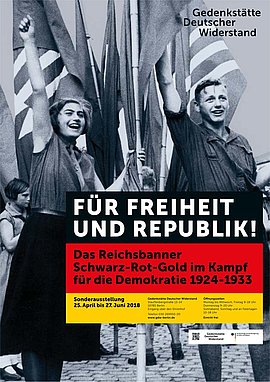 The exhibition opening by the chairman of the Reichsbanner Schwarz-Rot-Gold, Bund aktiver Demokraten e.V. Johannes Kahrs, Member of the Bundestag, and the head of the German Resistance Memorial Center Prof. Dr. Johannes Tuchel takes place at the German Resistance Memorial Center, at Stauffenbergstraße 13-14, 10785 Berlin, 2nd floor, Room 2B, at 6 pm on April 25, 2018.

The exhibition is on display in the special exhibition area on the first floor until July 22, 2018.
Opening hours